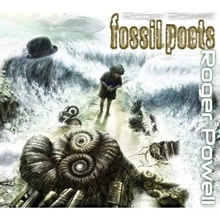 Quite a few years have passed since fans have heard anything from former Utopia keyboardist Roger Powell. The last he was spotted, he was part of a brief Utopia tour of Japan (documented on the Redux '92: Live in Japan DVD), yet rumors spread that after the tour, he had all but retired from the music biz.

Then, from seemingly out of nowhere, 2006 saw the appearance of Powell's first solo release in a dog's age, Fossil Poets. Joined by guitarist/bassist Greg Koch (with producer Gary Tanin adding some extra synth parts, as well), Fossil Poets is an entirely instrumental affair. But instead of focusing on their playing chops (as most instrumental rock albums do), the songs are mostly about creating texture, including the ambient album opener, "Lone Gunmen," and the robotic "Fallout Shelter."

Elsewhere, Koch provides some tasty Jeff Beck-esque guitar work (circa Beck's classic Blow by Blow/Wired period) on "Test Drive" and "Osmosis." Although Fossil Poets won't be challenging the Dixie Chicks for the top of the album charts anytime soon, longtime Utopia fans will surely be pleased with the album that signals Powell's return from the "missing person's list."  -Greg Prato AMG